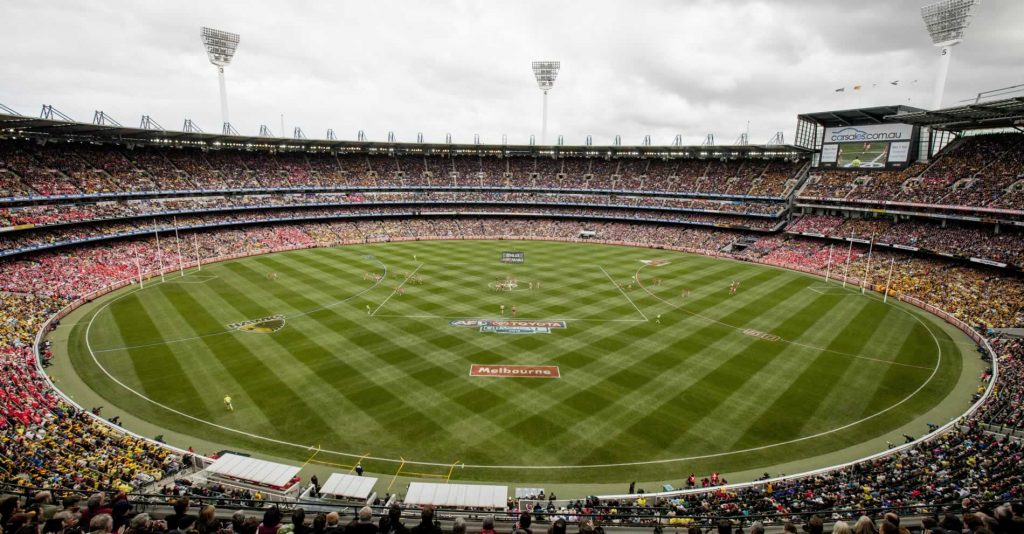 AFL Grand Final at the MCG

More than many of us want to know about football

(The other secular religions are coffee and food; minor anti-cults include weather and public transport.)

The weekend immediately after the ACAL conference is the AFL Semi-finals*.

These matches can be played anywhere in the world provided it’s Melbourne. If non-Victorian teams have managed to do better than ‘OK’ they may be allowed to have a final played in their state but Victorian teams are entitled to win.

*There are preliminary finals, elimination finals, qualifying final and the Grand Final. If more adjectives can be located, more finals may be added (but they’ll be played in Melbourne).

Are we born this way? Poet Bruce Dawe saw this

When children are born in Victoria
they are wrapped in the club-colours, laid in beribboned cots,
having already begun a lifetime’s barracking.

Carn, they cry, Carn … feebly at first
while parents playfully tussle with them
for possession of a rusk: Ah, he’s a little Tiger! (And they are …)

Pages of newspaper, and bytes of cyber are given over to pundits (i.e. retired players – sometimes better known now than when they played or because of their current hubris or rudeness) pontificate on percentages, points possession, priors and pockets. You can also see rotations, runners and rushed behinds. ‘Shepherds’, ‘smothers’, ‘specky’ (if you’re lucky), a ‘soccer’ and may be a ‘stacks on the mill’ might be on display. Once upon a time you would have heard ‘chewy on ya boot’ or ‘white maggot’ but times change.

You won’t see Cazaly, Bobbie, Hassa, Barass, Dermi, Libba, Jezza or Richo but people will still talk about them (well, most of them) and people with grey hair will know who they where and what they did!

Six pages of coffee terms or why I always go for a flat white (it’s simpler).

Combine coffee and footy and make a major environmental difference.